In mid-2012 a large school bus operator contacted Fusion Engineering to investigate the nature of a fire involving six school buses. The initial inquiry performed by the local Fire Marshall stated that the fire was caused by arson originating in the rear seat on one of the buses. The school bus operator was not convinced that arson was the cause of the fire and was further concerned that a risk may exist on other buses in the fleet. A full inquiry into the fire was necessary to provide a clear understanding of the cause. 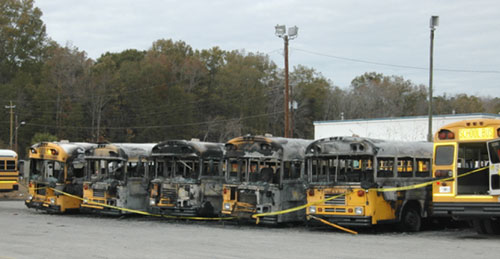 The investigation quickly narrowed the origin of the fire to the two center buses. Using several analytical and engineering techniques, the team at Fusion Engineering was able to determine the cause of the incident.

Some of these techniques included:

Arson Not Cause of Bus Fire

In contrast to the original investigation, the team at Fusion Engineering concluded that arson was not the cause. The source of the fire was in fact due to a faulty power cable located in the front of the bus near the starter. The cable’s protective loom had been chafed, exposing the wiring which caused the fire. Examination of other buses in the fleet revealed that six other vehicles had the same faulty wiring. A final report was presented to the Fire Marshall, who then changed the official cause of the fire. Due to the efforts and fast response of the team at Fusion Engineering, the school bus operator was able to quickly rectify the problem and ensure passenger safety.