A large custom home was built using drywall imported from China that had since been found to release sulfide gases over time and cause a host of problems in the home and to its occupants. The homeowner filed suit against the builder of the home, and therefore the builder needed to confirm whether corrosive Chinese drywall was indeed present in the home and precisely how much of the drywall in the home was problematic.

The drywall market had been infiltrated with material imported from China during a period of unprecedented demand. Some of this Chinese drywall was causing a host of problems in homes, including corrosion of plumbing and electrical components, air conditioning system failure, and in certain individuals, respiratory health issues. None of these issues had ever been observed in domestically manufactured drywall. Identifying drywall country of origin in a finished house is nearly impossible since the only identifier is stamped on the back side of the board. Using an interdisciplinary team including an architect, civil engineer, and chemist, Fusion Engineering devised a minimally invasive sampling and testing plan that would allow the builder to know how much of the drywall in the home was problematic. 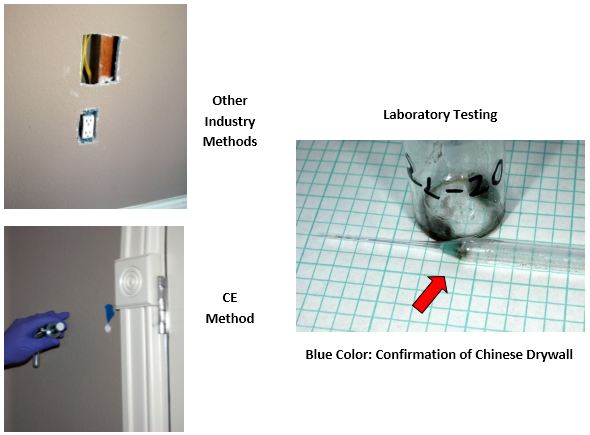